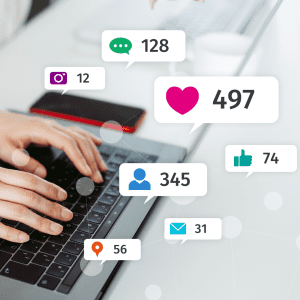 Influencers. Influencers as far as the eyes can scroll. They’re on Instagram, TikTok, Facebook, Twitter, YouTube, and probably anywhere else you can think of. Nearly everyone who uses social media knows who or what they are.

Simply put, influencer marketing is a form of online marketing. It takes the age-old idea of “celebrity” endorsements and places it into a more modern marketing campaign.

Though influencers certainly do not have the status of celebrities, they do have the power to affect the purchasing decisions of others because of their audience on social media platforms.

This power is especially true for micro-influencers or local influencers.

Local influencers focus their audience on the region they live in. Local or micro-influencers typically have under 100,000 followers, unlike national or macro-influencers.

If you own a small business or cater primarily to your local region, it can be very beneficial to enlist the services of local influencers.

But if you’re still not convinced, here are four reasons to explore local influencer marketing:

Local influencers use their platform to build trust and authority among their followers and the market they reside in. Because of the trust and relatability that they produce to their followers, when a local influencer recommends your product, they transfer their trust and relatability to your business. Local influencers’ brands are more focused and oriented on chosen markets. This focus is successful because they craft their content to their focused market, which is much more relevant to their audience, which typically translates into conversion.

Every business needs a steady flow of content to help boost its SEO and engagement. Because of this, influencers have become a great resource for boosting a business’s online presence. Working with influencers is a great way to improve the quality of your link profile, which has a big impact on your search ranking. So, when influencers do their job and create content and link to you, this generates a high-quality backlink for your site, which will increase your SEO and engagement.

One of the benefits of local influencers is in the name. They’re local and live in the same area. They’ve also figured this social media thing out. By partnering with a local influencer, your business and brand will take on their following. Maybe some of their followers have heard of you, but they probably have not. This is advantageous because you’re tapping into potential customers in your market through a source they already like and trust.

If you’re not sure where to start finding local influencers to help grow your brand, email us at sd@sdamktg.com.