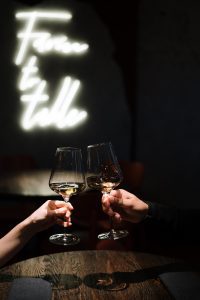 Marketers in small to mid-sized restaurant groups too often think they don’t have the budget or talent to launch a successful marketing campaign.

Instead, they stick with small-budget, low-key ads that aren’t effective, and use existing staff members to create these ads instead of hiring additional marketing professionals. These valiant but often misguided efforts end up wasting time and money.

When this happens, restaurant groups aren’t even left in square one, they’re left in minus square one because they’ve spent valuable time and resources on ineffective campaigns. That can lead to frustration, which can make it harder to regroup and move forward.

Advantages of Small to Mid-Sized Restaurant Chains Over Large Chains

Don’t be intimidated by the big chains and their big budgets. Remember that even McDonald’s saw a decrease in profit during the pandemic, while the beloved 62-year-old Sizzler chain filed for bankruptcy due to COVID.

Don’t sell yourself short. You may not have the marketing budget of big chains, but you have many advantages and tools that are accessible to your restaurant group right now.

Marketing is both an art and a science. If you don’t get it exactly right the first time, try again until you create a masterpiece. Remember, Leonardo da Vinci didn’t create the Mona Lisa in one go! Consider trial and error a valuable tool, so that when you encounter the inevitable pitfalls of marketing, you can be aware of them and pivot accordingly.

Here are the top five marketing pitfalls to avoid:

Don’t try to do everything yourself. As the marketing professional tasked with the creation of successful ad and marketing campaigns, you have a lot on your plate. Marketing strategies have many components, and if you’re trying to do everything on a national and local level, you are likely burning the candle at both ends.

While you’re undoubtedly capable of performing each individual marketing task, when they’re combined, they’re too much for one person to handle. When you reach this situation, it’s time to hire another marketing member or outsource. This won’t cost millions, and what it does cost, you’ll make up in multiples with a successful marketing campaign.

Don’t lose sight of each location’s individuality. Marketing professionals know that it’s crucial to define their target audiences before launching an ad campaign. But what sometimes gets lost in national campaigns is the localization aspect. Yes, there is a place and need for a national, or even global marketing strategy, but with restaurants, localized campaigns can go a long way. Customization is key in creating attractive ads for people who live in different locations.

Make your mission appeal to your target audience. Today, it’s not enough for restaurants to serve food, they need to do it with a purpose.

Starbucks’ mission statement,  for example, is  “to inspire  and nurture the human spirit – one person, one cup, and one neighborhood at a time,” a sentiment that touches the group’s main demographic: middle to upper-class corporate workers.

Chipotle’s mission statement is “food with integrity,” and the chain backs it up by sourcing ingredients from organic and local sellers.

P.F. Chang’s, an Asian restaurant chain with 300 locations in the U.S., lists its purpose as “Celebrate life, family, and food.” In just five words, P.F. Chang’s elevated its mission from the simple act of eating food to the grandiose purpose of celebrating life and family. Brilliant.

Make sure that your restaurant’s mission and values appeal to its target audience.

Don’t be afraid to try new things. Consumers don’t want to see the same boring ads all the time. As a marketer, you should unleash your creativity and try out different approaches. This is especially true if your current marketing campaigns aren’t doing well. If you’re not getting the results you want, it’s a sign to try something new. After all, isn’t the definition of insanity trying the same thing while expecting different results?

Now that you know the pitfalls to avoid, what do you need to do to be successful? We’ve shared five insider tips below.

Marketing is one of the only areas in which being aggressive is appropriate. Even if you make the best burger in the world, you can’t expect your product to speak for itself. You need to speak for it. Launching proactive ad campaigns across multiple channels will get your restaurant’s name out there. They don’t need to cost millions, but they do take time and effort.

-Aggressive marketing includes any of the following:

As you can see, there are numerous channels you can use to get your restaurant’s name across. Your level of creativity and ability to measure metrics will determine the success of each promotional campaign.

We specifically love loyalty programs that are attached to apps. According to Fast Casual, an industry-leading website that reports on the latest restaurant trends and updates, there is a high consumer demand for local chain restaurant apps—provided that these apps offer easy ordering, easy payment, loyalty rewards, and coupons.

7-Eleven, Starbucks, and Pizza Hut are chains that have successful loyalty and rewards programs (and here are some more). While these are mostly larger chains, you can look at what they do right and scale to the scope of your own restaurant group.

Word of caution: when you have an idea for a loyalty reward, run it by your accountant to make sure that your restaurant won’t lose money by giving away too much. (It has happened before!)

Who can forget McDonald’s catchy jingle, “I’m lovin’ it?” or the famous KitKat song, “Gimme a break?” (Not to mention all of these.) Audio branding isn’t only about commercial jingles (though if you have a catchy one, that’s awesome!). Audio branding is using music to create a connection between your restaurant group and the customer. It can include a commercial jingle, but also the background music in the restaurant or the music while your customers are on hold on the phone. You can use audio branding to influence customers’ buying behavior and boost brand loyalty.

4. Focus on Your Neighbors

It’s important for restaurant groups to have both national (if relevant) and local marketing strategies. Taking the time to learn about the locals of each branch can pay great dividends. After all, if you’re not located in a heavily touristy area, your patrons are locals who, ideally, can become regulars. That means you should give them what they want, whether it’s live events, contests, giveaways, or a specific item on the menu. Do your due diligence so you can come up with marketing that appeals to your neighbors.

After you’ve maxed out all the possible promotional options that your time and budget allow, the main thing that will keep patrons coming back for more is the quality of your restaurant’s food and service. McDonald’s wouldn’t be so successful if people didn’t love the taste of their burgers and if they weren’t ready fast. Make sure that all the hype you’re generating is backed up by great food and great experiences.

Wendy’s is a prime example of a restaurant chain that “gets” social media. Its standout platform, perhaps surprisingly, is Twitter. Around 2017, Wendy’s decided to throw out the corporate social media handbook and started to add some personality to its tweets.

In 2018, Wendy’s took its spunky Twitter persona to a new level by creating “National Roast Day,” a made-up holiday observed on January 12 in 2022. Wendy’s roasts were brutally funny, but behind the razor-sharp wit was a call to a promotion of free medium-size fries on the app. The promo was almost an afterthought to the entire roasting bonanza, which is part of the brilliance. The other part is simply being sharp as a tack, which Twitter users and customers love.

Wendy’s commandeered a social media platform that millennials and Gen Zers might not call their first choice and used it to connect with them. Its tactics are so well-loved that even non- Twitter members heard about Wendy’s Roasting Day on the news.

What can we learn from it?

1. Adapt. In 2017, Wendy’s saw that its social media strategy wasn’t working. Marketing leaders took an ax to their current strategy and rebuilt it based on research about what the public wants.

2. Don’t be afraid to go first. Wendy’s was the first restaurant to introduce a casual, irreverent tone in its marketing. While many others followed suit, the risk Wendy’s took ultimately paid off.

3. Be human. People today don’t want to hear from corporations they can’t touch. They want to feel your humanity. Show it to them.